As you may be aware of the Raid ID’s, I wanted to bring to light a recent change that has been added to the game. Link to the references listed is below.

Before you read the below reference, please allow me to elaborate. 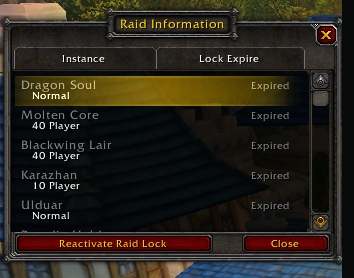 You may see that your raid ID has expired. This does not mean it hasn’t been reset because as the following change below describes, you can choose to extend your existing raid ID to continue progress.

The Instance Lock Extension feature was added in Patch 3.2.0 to request an exception to the raid timer. In order to allow for parties and raids to progress through instances at their own pace, players are now able to extend a dungeon or raid ID on an individual basis.

Existing or recently expired IDs can be extended via the Social tab under Raid by clicking on Raid Info. The ID of any instance to which a player is saved can be extended. Doing so will extend the lockout period by the same amount of time as the original lockout (i.e. extending an Ulduar raid ID will add 7 days, a Heroic: Halls of Lightning dungeon ID will add 24 hours, and a Zul’Gurub raid ID will add 3 days to the lockout time). An ID can be extended more than once. An extension can be reversed on an individual basis provided the player does not do anything in the instance during the extended lockout period that would save that player to the instance.

If the Raid leader locks himself into the Raid for an additional week, does it set the flag for everyone on the team? If the raid leader extends his ID, it won’t automatically extend the instance ID for everyone who was in the raid. Each player will have to extend his or her own ID. However, if the raid leader extends his ID inside an instance, when others subsequently enter the instance to join that raid they will get prompted that they will be saved to the extended ID, which they can accept or decline, exactly as when saving to an instance that has already started.


Can you “undo” an extension? Yes and no. If you have not gone into the instance since it would have normally reset (since it was extended), you can still reset it and get a new ID. However, if you have already gotten saved to the extended instance again, you’ll have to wait out the rest of the lockout period for a new ID.